6 in 10 fear a mass shooting; most think gun laws can help: POLL

With six in 10 worried about a mass shooting in their community, Americans by a 17-point margin express confidence that stricter gun control laws would reduce such incidents, and even more endorse improved mental health monitoring and treatment to that end.

Two measures, specifically, remain overwhelmingly popular: Eighty-nine percent in a new ABC News/Washington Post poll support background checks for all gun purchases, including private and gun show sales; and 86 percent back “red flag” laws allowing the police to take guns from individuals found by a judge to be a danger.

By a 15-point margin, 56 to 41 percent, the public supports banning the sale of assault weapons. That’s off its recent peak, 62 percent, after the shootings at Marjory Stoneman Douglas High School in Parkland, Florida, last year, but well up from its low, 45 percent in late 2015. 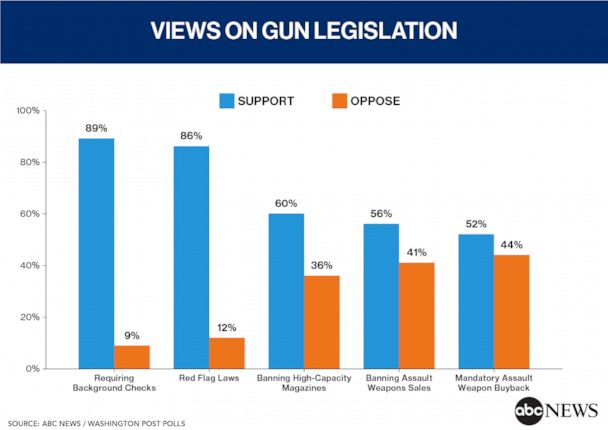 Beyond banning assault weapons sales, 52 percent support a mandatory buyback program in which the government would require owners to turn in their assault weapons in exchange for payment. And six in 10 in this poll, produced for ABC by Langer Research Associates, support banning high-capacity ammunition clips.

Gun policy may be debated again as Congress returns to session this week, following mass shootings across the country that killed at least 35 in August. Americans trust the Democrats in Congress over Donald Trump to handle gun laws by 51-36 percent.

Fifty-eight percent express confidence that stricter gun laws would in fact reduce mass shootings; 41 percent are skeptical. As noted, there are also especially broad hopes for improved mental health monitoring and treatment, as 76 percent think those kind of programs would reduce mass shootings. 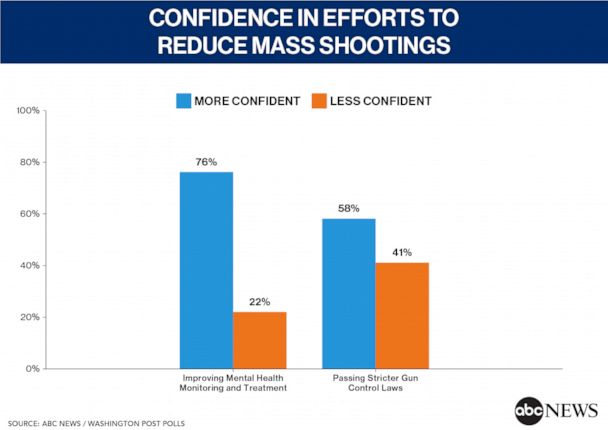 There’s a similar effect when it comes to a mandatory buyback and the banning of high-capacity magazines. But the gap shrinks on the two most popular measures: Background checks and red flag laws win broad majority support, even among those who are skeptical that stricter laws would reduce mass shootings. 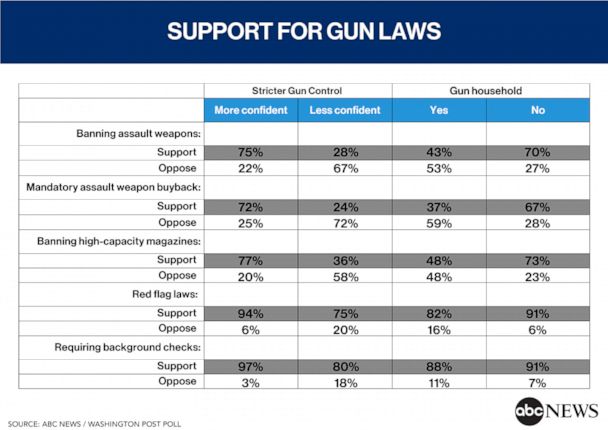 There are other big differences among groups when it comes to the assault weapons question. Women are 20 percentage points more likely than men to support banning the sale of these weapons, 65 percent versus 45 percent. While support is higher in urban areas than elsewhere, there’s a broad gap between urban women (of whom 73 percent support a ban) and urban men (of whom 52 percent do). And among political independents, 72 percent of women favor a ban, compared with 43 percent of men.

Education is also a sharp divider. Support for banning assault weapons rises with more education, ranging from 72 percent of those with postgraduate degrees to 46 percent of those with no more than a high school diploma. But here, too, gender influences attitudes. Among women who haven’t gone beyond high school, 55 percent back an assault weapons ban; among their male counterparts, it’s 38 percent.

And politics is a very prominent factor, as likely will soon be on display in Washington. Eighty-one percent of Democrats support an assault weapons ban, compared with 55 percent of independents and 33 percent of Republicans. The results are very similar moving from liberals to moderates to conservatives.

(MORE: Here’s where the 2020 Democrats stand on gun control)

But again, the most broadly backed items break the mold. Mandatory background checks and red flag laws win support from at least eight in 10 Republicans and conservatives, and as many or more of all others. On these, at least, politics seem to give way.

This ABC News/Washington Post poll was conducted by landline and cellular telephone, Sept. 2-5, 2019, in English and Spanish, among a random national sample of 1,003 adults. Results have a margin of sampling error of 3.5 points, including the design effect. Partisan divisions are 28-24-37 percent, Democrats-Republicans-independents.

The survey was produced for ABC News by Langer Research Associates of New York City, with sampling and data collection by Abt Associates of Rockville, Maryland. See details on the survey’s methodology here.

No endorsement of Security and Training Solutions by the US Government, Department of Justice, or Federal Bureau of Investigation, or their respective personnel is intended or implied. Since many aspects of Active Assailant situations are out of our control, there is no guarantee as to the outcome of the use of Active Assailant Survival Skills (A₂S₂). Services provided in Buffalo, NY, Western NY and throughout the United States.